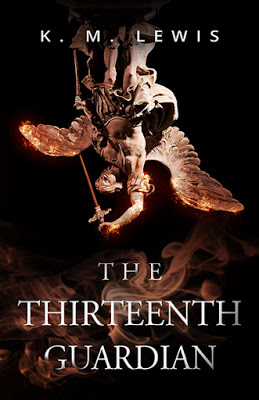 Da Vinci’s secret pales. Michelangelo concealed an explosive truth in his famous Creation of Man fresco in the Sistine Chapel at the Vatican. Everything we have been taught about Eve is wrong—she didn’t cause the fall of man. Instead, Eve carried a far more devastating secret for millennia; one that will change the world forever.

As the modern-day world suffers the cataclysmic effects of the “Plagues of Egypt”, Avery Fitzgerald, a statuesque Astrophysics major at Stanford, discovers that she is mysteriously bound to five strangers by an extremely rare condition that foremost medical experts cannot explain. Thrust into extraordinary circumstances, they race against time to stay alive as they are pursued by an age-old adversary and the world around them collapses into annihilation.   Under sacred oath, The Guardians—a far more archaic and enigmatic secret society than the Freemasons, Templars, and the Priory—protect Avery as she embarks on a daring quest that only legends of old have been on before. Avery must come to terms with the shocking realization that the blood of an ancient queen flows through her veins and that the fate of the world now rests on her shoulders.

As he approached the Sant’Angelo Bridge, he stopped for a moment and looked left at Castel Sant’Angelo, which was once the tallest building in Rome. Castel Sant’Angelo was built by the Roman Emperor Hadrian, around 125 AD, as a mausoleum for him and his family. At the top of the castle is a statue of the Archangel Michael—renowned for leading God’s armies against Satan’s army in the final battle in the Book of Revelation.

Something about standing in the shadow of the Archangel Michael this evening caused Eli to stop and stare at the statue. He noticed, for the first time, that Archangel Michael appeared to have just unsheathed his sword—as if the time for that final battle, prophesied in the Bible, had finally arrived. Eli observed that Michael had a calmness etched on his face that evoked both sadness and resolve.

BookFunnel link to the book – https://dl.bookfunnel.com/mn6ccg5rjy

I travel a lot for work. A LOT. So I do most of my writing on the move. When I write, I have the story saved in the cloud – so I will start a new chapter on my MacBook at 5am in my hotel before I head to the airport to catch a flight. I will pick up the writing on my iPhone in the back of an Uber—sitting in traffic—or waiting in a long airport security line, and then finish the chapter onboard a long flight. One of the chapters in the book was started in a hotel lobby in central London, finished somewhere over the Atlantic and spell checked in an Uber from JFK in New York.

I have always been intrigued by Bible and religious mythology. For many years, I have wondered if the apocalyptic events described in the Bible (past and future—i.e. Revelation), were/will be caused by a physical catalyst. What is absolutely fascinating to me is that many of the apocalyptic events described in the Bible appear in several other religious texts from around the world, and also appear in the earth’s historical record. For example, the story of Noah and the Flood is almost precisely similar to flood myths from China, India, Polynesia, Mesopotamia and many other communities around the world. Many of these myths involve a huge global flood and a group of people that were saved because they somehow knew the flood was coming and built some type of boat to save their family. They also stored grain and brought some animals along for the ride too.

I tried to ignore the obvious questions for years but they kept nagging at me. So, I finally decided to start reading and digging. And whoa! Our history may be much more interesting than we have known. The Thirteenth Guardian Trilogy is a fictional account that explores some of what I found over the last ten years of looking.

Over the years, I have visited many of the locations featured in the book – The Vatican, The Capitol Building in Washington DC, The Philadelphia Museum of Art, Salt Lake City, Tokyo, Rome, The Greenbriar Resort; and more. The descriptions of these locations are based largely on my experiences when I visited those locations, and also reading up on them in detail to make sure that all the details captured are as accurate as possible. I have also read A LOT about world myths and religious beliefs, and I have spent quite a bit of time researching ancient religious texts and artifacts e.g. Hindu, Egyptian, Mayan etc. There is so much rich information that is available to anyone who wants to dig into this topic – you can spend weeks and weeks, reading up.

A Panster. Many of the scenes that I think are the most compelling in the book unfolded as I wrote. I had no idea how the chapter would end as I wrote the first word in the chapter. I wrote the first book really fast – it just kept pouring out, and I could not go to sleep until all the thoughts were on paper. So I would just start writing and see where things would go. At the end of some of the chapters, I would stand up, look back at the computer screen, and think, “OK – where the heck did that come from?!”

I always write listening to musical scores. For some reason, the genre clears my mind and opens up a channel into my mind. I am a big fan of Hans Zimmer when I write – so I put on my head set and just go to his Pandora or Slacker channel and start typing on my Mac or iPhone.

I have re-read a couple of Dan Brown’s books, and I have Michelle Obama’s book sitting on my table staring back at me. I really need to find the time to read it.

Huge fan of GoT. But not for the reason that most people love the show. I think there is a much deeper layer to the show that struck me as soon as I started watching it. Has to do with ancient knowledge and the cycle of ancient history that always seems to repeat itself – Samuel Tarly is the one character that touches on it a bit in one of the seasons. If you read the Thirteenth Guardian, you can almost see the parallels.

K.M. Lewis has lived in multiple countries around the world and speaks several languages. Lewis holds a graduate degree from one of the Ivy League Universities featured in his book. When he is not writing, Lewis doubles as a management consultant, with clients in just about every continent. He does much of his writing while on long flights and at far-flung airports around the globe. He currently resides on the East Coast of the U.S with his family.