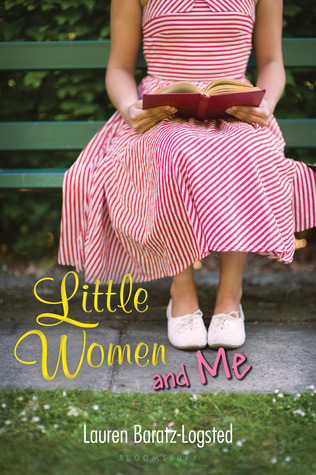 Teaser Tuesdays is a weekly bookish meme, hosted by MizB of Should Be Reading. Anyone can play along! Just do the following:

• Grab your current read
• Open to a random page
• Share two (2) “teaser” sentences from somewhere on that page
• BE CAREFUL NOT TO INCLUDE SPOILERS! (make sure that what you share doesn’t give too much away! You don’t want to ruin the book for others!)
• Share the title & author, too, so that other TT participants can add the book to their TBR Lists if they like your teasers!

“Honestly, no matter how often Jo reminded me that I was fourteen, I couldn’t help but feel like I was surrounded by a group of people much younger than me, less sophisticated. Well, maybe because I was” (Chapter Three, 14%).

Also, I have signed up for the 2014 Book Bingo Reading Challenge! Go visit Reading In Winter where you can find the rules and join the challenge at any time during the year.

If you are interested in expanding your reading goals even more, here are 7 Reading Challenges to Join in 2014.

This weekend I’ll be reading Deenie by (the great) Judy Blume. I am in a reading and writing funk, so I need to rekindle my tween-aged love of books this weekend. I absolutely adored this one. Read it so many times, and always think about it when I see Natalie Wood in Spendor in the Grass.

I’m half way through Diary of a Mad Housewife, and I’m really enjoying it. I find it really interesting to see how differently the 70s changed women’s views on independence and the typical 60s idea of what a housewife should be.

Hotel on the Corner of Bitter and Sweet by Jamie Ford

Elemental (Book #1) by Antony John (The cover art is really a lot like Divergent, isn’t it?)

May We Be Forgiven by A.M. Homes (Winner of the 2013 Women’s Prize for Fiction.)

I’m going to start Along for the Ride today. I just got it from the library, and I really want to finally finish a Sarah Dessen book. I love what I’ve read of her other books, but I always have to return them to the library or something before I get to the end.

Yesterday I bought Diary of a Mad Housewife that has the cover from the movie, not the new edition cover. I love 70s movies and this one [full movie on Youtube HERE] was one of my favorites when I had Starz channel during college.

I also bought Pretty Little Secrets because I miss my Pretty Little Liars books (I stopped after book #5), and I pre-ordered Sarah Dessen’s Moon and More which will come out next month.

The Revised Life of Ellie Sweet by Stephanie Morrill

Across the Universe by Beth Revis

What? A princess
Me Yeah, right.
Mia Thermopolis is pretty sure there’s nothing worse than being a five-foot-nine, flat-chested freshman, who also happens to be flunking Algebra.
Is she ever in for a surprise.
First Mom announces that she’s dating Mia’s Algebra teacher. Then Dad has to go and reveal that he is the crown prince of Genovia. And guess who still doesn’t have a date for the Cultural Diversity Dance?

As I mentioned before, I got this book as my first audiobook on Kindle through the library. I needed something to listen to in the bath, and since this is one of those books that everyone is supposed to have read, I really wanted to give it a try. I was honestly surprised at how much I liked it. Anne Hathaway reads this so well and shows the character of Mia the way she was intended. That’s the best part of this book; the character of Mia. While this is just the start of her journey as a princess, the voice of Mia was really endearing. She’s funny and clueless and overdramatic and you want to keep reading her diary. She’s a good role model too, so she’s definitely a positive female lead in a novel, even though it’s a pink cover and about a princess. I love books written as a journal or epistolary style as well – they just give you a nice, strong sense of who the character is and what they’re going through.

I know that it is a little predictable for Josh Richter, the cutest boy at school, to end up being a tool, and Lilly ending up being her best friend again after she sees what kind of crap Mia’s been going through. And Michael being the real object of Mia’s affection was totally obvious, but I loved that anyway. It had all the charm of a typical teenage movie. I have seen bits of the movie with Anne Hathaway, but I’ll have to watch it on Netflix this week to see if it really did the book justice.

A lot of fantasy books I’ve read are basically this whole idea of a young girl discovering she’s a princess. This is just done so much better than the books who sort of force you to feel bad for them, since they’ve inherited some magical kingdom or something. It’s no secret that I don’t love high fantasy, so a cute, contemporary, young adult novel really pleases me. I would most definitely read more of The Princess Diaries books in the series.

I know I’m way behind on this, but I started listening to The Princess Diaries

on audiobook from the library last weekend when I needed something to listen to in the bath. Anne Hathaway reads it so well – I just love how much life she puts into the character’s voice (and I’m not a huge Anne Hathaway fan.) I got the book in Kindle format to read as well.

this morning, so I’ll try to write a review this weekend or so. I didn’t hate it as much toward the end.

Again, I have Delirium

to finish. I just needed a break from the violence and dystopian world for a bit.